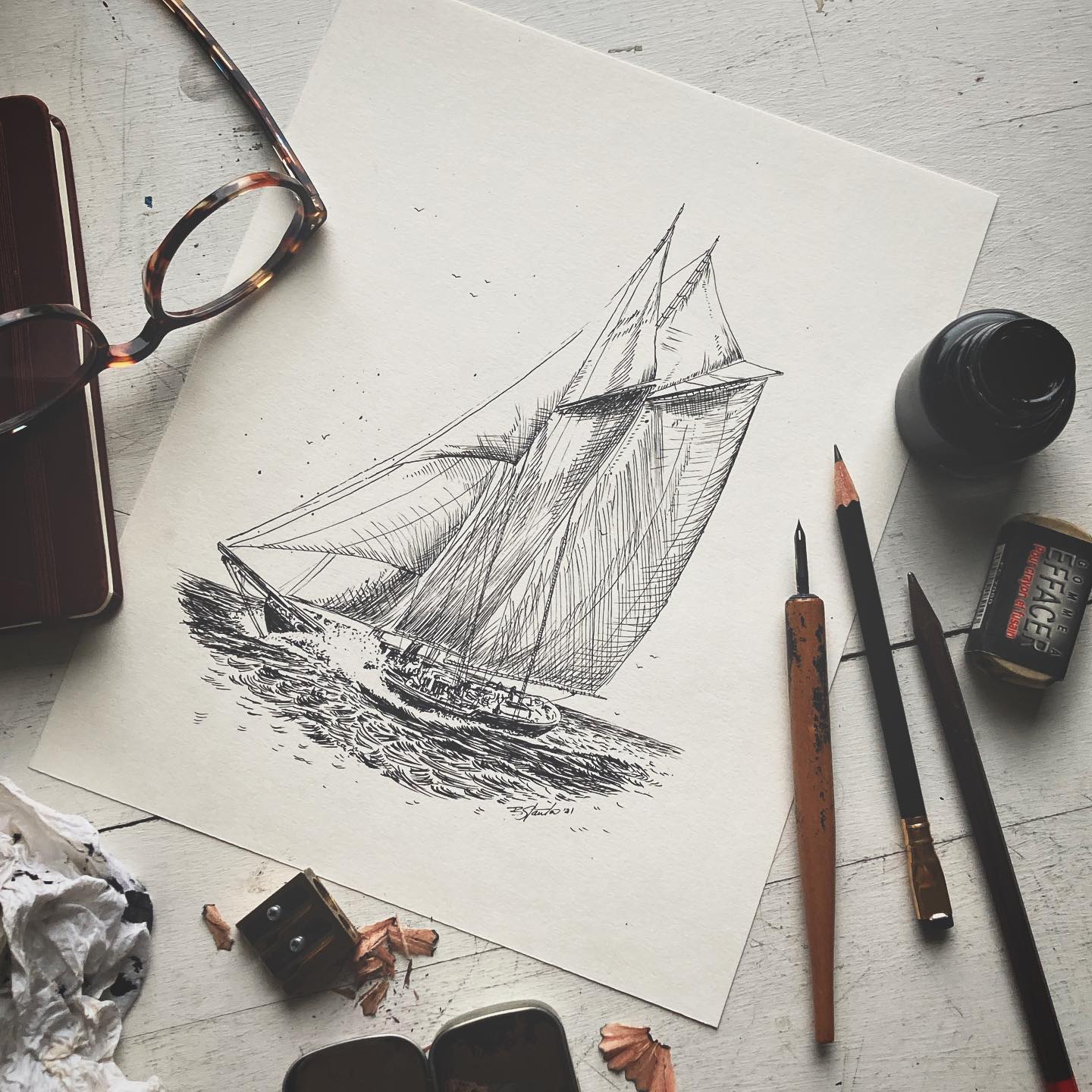 Set Sail – An Homage to Schooners

In 2012, my husband and I were ecstatic to hear that the tall ship Bluenose II was set to relaunch. I had just discovered the romance that was the Age of Sail and my husband had long since fallen in love with it. All things maritime and nautical were on our minds. We watched sailing movies, read books, and listened to enough Stan Rogers to last a lifetime. I was quite frankly, obsessed.

For those unfamiliar, the Bluenose II is the tall ship sailing ambassador of our home, Nova Scotia. If you’ve held a Canadian dime you’ll have seen her likeness. She has an incredible history, originally launching in 1921 as a Grand Banks fishing schooner. She was also a decorated racing schooner, competing in the Fishermen’s Cup numerous time, widely considered undefeated.

As much as I love the Bluenose, there are many other schooners very much like her. The Grand Banks schooners were heroes in the Age of Sail, sustaining countless east coast families. They provided a sense of pride and excitement for their communities in the schooner races. Over and over I have been wowed with stories of their grandeur, fuelling my love for the Atlantic Canadian culture and history.

With this love I am inspired to of course, make art. I’ve drawn many sailing vessels, some schooners, some sloops, some larger riggers, always a challenge.

I created this piece with not one schooner in mind, but all the Grand Banks sailing ships. Done in pen and ink on 8″x10″ mixed media paper, I thoroughly enjoyed drawing this piece. Each and every ship I draw provides a new lesson in art and this was no exception.

Drawing waves is particularly challenging for me, especially with pen and ink. Knowing which areas to leave white, and how to fill in those dark spots peeking through the spray; it’s always tricky. With each wave I learn more.

The most enjoyable part of drawing ships? The sails and rigging. Lots of shadows interesting line work. The least enjoyable? Always the hull. It’s very difficult to know which details need to be clear and which are more just indistinguishable shadows and white space. Do I throw a crewman in there somewhere? Does it look like a human or just a blob? So difficult. And did I mention the shape of hulls? What an adventure I have trying to get that right! But again, always a valuable lesson in art.

I hope you enjoy this piece as much as I enjoyed making it. If you’re interested in purchasing the original, please contact me.

Unable to splurge on an original? No worries, I’ve made the artwork available on products in my shop.